This two-story stable building was constructed in 1902 for William R. H. Martin, a businessman and real estate developer active in the Murray Hill section of the city. Architect Ralph S. Townsend designed this small building in a distinctive Dutch Revival style, with an elaborate stepped gable and oversized white granite quoins and voussoirs, which set off the Flemish brickwork. Oval inset panels of horse heads allude to the building's original function, while a bulldog near the top of the gable adds a whimsical element.

The stable was purchased in 1907 by George S. Bowdoin, who lived nearby at Park Avenue and East 36th Street. Bowdoin was a partner in the banking firm of J. P. Morgan and Co. and lived close to Morgan's residence, which was at the corner of 36th Street and Madison Avenue. In an arrangement typical of private carriage houses, Bowdoin's stable housed his horses and carriage on the ground floor, and had living quarters for the coachman on the upper floor. Bowdoin's daughter Edith inherited the building from her father, had it converted to a garage in 1918, and held ownership until 1944. As a rare surviving stable structure in Manhattan, this building serves as a reminder of the period of New York’s history when horses were an important part of daily life and their care and housing had to be taken into consideration; when this carriage house was built, there were approximately 4,500 stables in the city, accommodating more than 70,000 horses. 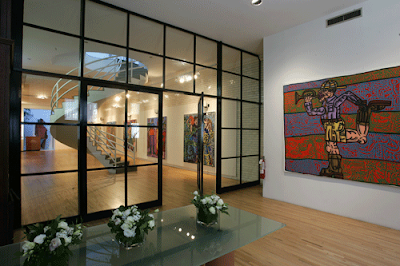 At the time the carriage house received historic landmark status in 1997, it served as a single family residence. Now owned by the Gabarron Foundation Center for the Arts since 2002, this unique space serves as a meeting place for organizations, corporations, government and individuals. The sun-lit contemporary interior is in striking contrast to the period facade. Recent bookings at the carriage house include product launches, culinary events, cocktail receptions, fashion shows, film shootings, private dinners, weddings, lectures and seminars. When not leased for special events, the Gabarron Foundation promotes Spanish and Latin American culture by producing public concerts, art exhibits, lectures, tastings and film screenings. 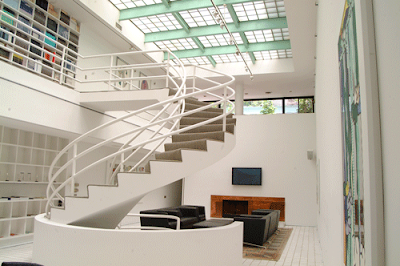 Trivia: A few doors down, at 133 E. 38th St., detective novelist Dashiell Hammett lived at this address in 1931, when he was writing The Thin Man. Across the street, near the corner of Third Ave., Gutzon Borglum, the sculptor of Mount Rushmore, lived at No. 166 from 1901-12.

Note: While many carriage houses faced the street, the vast majority were located in mews, off an alley (street front property being too valuable for a carriage house). Of course, most of the present day survivors have been converted into coveted private homes, a pleasant alternative to high rise living. A notable example is Sniffen Court (photo below), off 36th Street in Murray Hill, also between Lexington and 3rd Ave., where the former Civil-War era stables, designed by architect John Sniffen, were converted to ten residences during the 1920s. These homes are in high demand. Until she died while working in her Sniffen court studio, Malvina Hoffman (1887-1966), a New York City born student of Rodin who became an important American sculptress, kept a salon here, at the far end of the alley, where a hand pump once supplied water for the thirsty horses; Hoffman’s decorative plaques of Greek horsemen can still be seen flanking either side of the former studio's entry (bottom photo). Another American female sculptor, Harriet Whitney Frishmuth (1880-1980), also a student of Rodin, lived at Sniffen Court until 1937. The homes are privately owned, except for two that have entrances directly on 36th Street: The Amateur Comedy Club (now a private membership club not open to the public) and the exclusive showroom of habersasher Henry Jacobson (to the left of the gate). The Sniffen Court Dramatic Society, an amateur theater group, used to perform plays in a theater located within the court.

Trivia: the cover for the Doors 1967 "Strange Days" album was shot here. But you knew that. 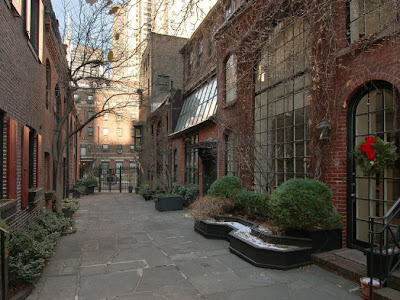 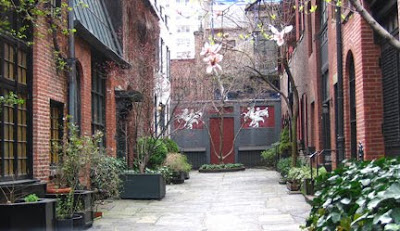 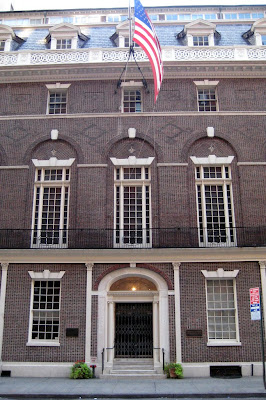 In 1903 Mrs. J. Borden Harriman (president), along with other wealthy women, including treasurer Anne Morgan, daughter of J. P. Morgan, raised the astounding sum of $500,000 and commissioned Stanford White, of the leading architectural firm of McKim, Mead & White, to build a home for their newly formed women’s social club, known as the Colony Club. This structure, located on the west side of Madison Avenue just north of 30th Street and built between 1904-1907, was modeled on 18th-century houses in Annapolis, Maryland. The landmarked interiors, which still exist, were created by Stanford White's long-time friend Elsie de Wolfe, a former actress who had recently opened an interior-design business; her companion, theatrical agent Elisabeth Marbury, was one of the club's founders. Wolfe’s adept completion of this commission established her financially successful career as a society decorator. De Wolfe, who became known as America's first decorator, lived in the club during construction, designing interiors ranging from French reproduction to American neo-Colonial styles. 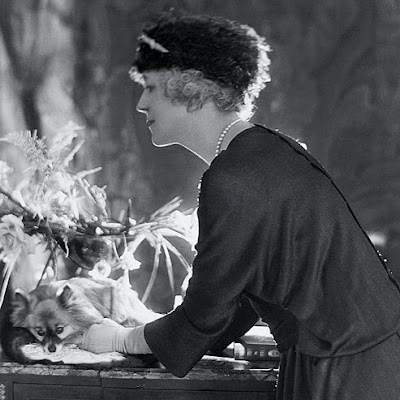 Miss de Wolfe’s later marriage to diplomat Sir Charles Mendl in 1926 (she was sixty-one and became "Lady Mendl") was front page news in the New York Times, which revealed that “the intended marriage comes as a great surprise to her friends.” Since 1892 she had been living openly in a lesbian relationship. As the Times stated, “When in New York, she makes her home with Miss Elisabeth Marbury at 13 Sutton Place.”

When the Colony Club opened in 1907, the interiors established her reputation overnight. Instead of imitating the dark, heavy interiors of most men’s clubs, de Wolfe introduced a casual, feminine style making liberal use of glazed chintz (immediately making her “the Chintz Lady”), tiled floors, light draperies, pale walls, wicker chairs, clever vanity tables and the first of her many trellised rooms. Among her innovations was the installation of ceramic stoves in lieu of fireplaces. The astonished reaction of the members to her iconic indoor garden pavilion (photo below) put de Wolfe’s name on many lips and led to lucrative commissions across the country. Her contract with Henry Clay Frick, which paid commissions on every item she selected, made her a rich woman. Later clients included Cole Porter, Condé Nast and the Duchess of Windsor. 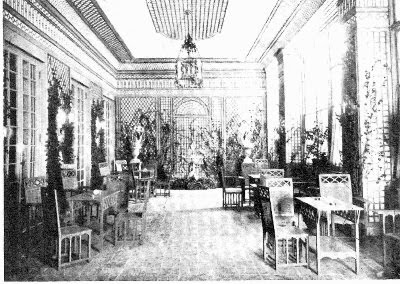 The Federal Revival style building has unusual header-bond brickwork applied in what is known as a diaper pattern (click top photo to enlarge). Sold after the club moved to larger quarters on Park Avenue, the structure serves today as the east coast headquarters of the American Academy of Dramatic Arts, housed at this location since 1963. The building was awarded Landmark Status by the City of New York in 1966.

Though the original purpose of the club was to provide athletic facilities, its elite status cemented the social standing of the original 500 subscribers when it opened in 1907. The New York Times published a complete membership roster on the first anniversary of the club. Included were four Vanderbilts, four Whitneys, Mrs. John Jacob Astor and Mrs. Walter Damrosch (her father, Republican politician James Blaine, ran for president of the United States against Grover Cleveland). The ground floor had receiving rooms, and the second floor contained a double-height gymnasium with a running track on the balcony, and an elegant French-style ballroom at the front, with a musicians’ balcony above. In the basement was a swimming pool, which still exists, surrounded by white marble walls and floors, with an illuminated trellised ceiling.

However, there arose a significant problem within a month of the club’s opening. A law prohibiting liquor licenses within 200 feet of a church, without the church's consent, had not been taken into account. Across the street was Madison Avenue Baptist Church, which refused to grant such permission, reflecting its denomination’s strong stance on temperance. While club officers denied that the club even served alcohol, stating that members brought in their own, the presence of a wine room in the basement ran counter to that claim. Further, a disgruntled employee leaked receipts and other documents to the press, including a menu reading, “All wines will be charged by the bottle.” In fact, the club was not able to get a liquor license until it moved north to larger quarters on Park Avenue (photo below). 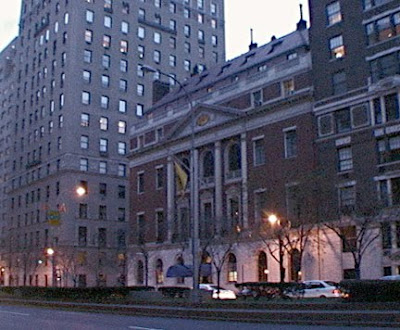 The club eventually replaced most of its women employees with men, because, as the New York Times reported, “A club officer said that the female employees put themselves on an equal plane with the members and talked too much.”

When vacated by the Colony Club, the original building soon became a WWI hospital, then a club for Catholic girls and later an arts center. When the American Academy of Dramatic Arts moved in, it converted the gym and ballroom to theaters, but made few other major changes. They have recently repaired and cleaned the exterior, and original custom lighting fixtures remain intact. Original mirrored walls also remain unaltered. Fortunately, the limited financial resources of the owners have prevented disposing of original decor and architectural elements. For instance, when the academy considered installing modern windows, its contractor priced new windows at $9,000 each, whereas repairing the original ones cost only $3,000 per window. Also, students do not live in the building, which decreases wear and tear associated with most college structures.