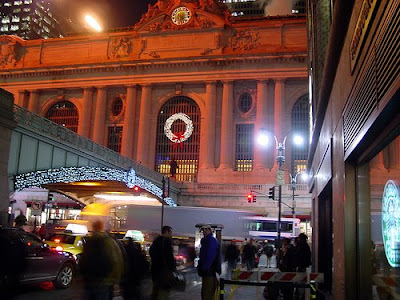 See a spectacular kaleidoscope light show displayed against the famous Zodiac ceiling, walls and pillars of Grand Central Terminal, the world's largest train station. The light show is a holiday tradition established in 1999 and is enough to stop even the most frazzled and jaded commuters in their tracks.

To the strains of Duke Ellington’s “Take The A-Train,” lasers on the ceiling show two commuter trains arriving from opposite directions. The trains pull to a stop, and a reindeer leaps out of each one and crosses over to the other train. Then a laser beam traces the outline of one of the zodiac constellations painted on the ceiling. The crab (Cancer) leaps to life and becomes a train conductor, sidling down the center aisle of the car, punching the reindeer's ticket stubs with its claws.

Delighted tourists hold on to each other as they lean over backward to gaze at the overhead display. Another show starts. The familiar music of Tchaikovsky's Nutcracker Suite fills the enormous room. As “Dance of the Sugar Plum Fairies” begins, the Empire State Building and the Chrysler Building sprout arms, bow to each other, and begin waltzing across the ceiling. The show ends with giant sprigs of mistletoe appearing over the heads of the commuters and tourists. Cell phones come out of purses and pockets as tiny flashes capture affectionate real-life kisses and lingering hugs by those who just watched the show. Ah – Christmas in New York City! 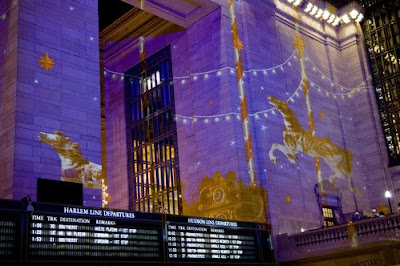 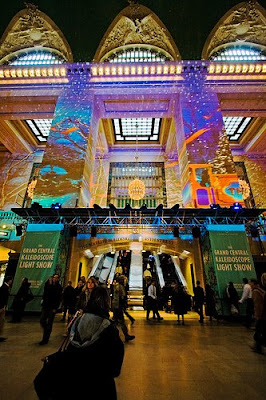